Building Visualizations through Mapping and Anti-Mapping

MDMP’s ecologies will both rely on and complicate the parameters of traditional geographic maps. The idea for visualizations came about as a result of conversations with various scholars in the discipline who had been collecting different forms of data, but were uncertain of how to use the data they gathered and what scholarly products might come out of it in those forms: for example, spreadsheets tracing the mentions of rhetoric or writing primers authored by women but now out of print; archival finding aids with obscure references to partially processed or as-yet unprocessed ephemera; research notes based on the curriculum vitae or faculty files of non-tenure-track (NTT) women instructors whose names never appeared in the MLA Transactions due to their NTT status in English departments or in traditionally published outlets; and the list goes on. Such varied ephemeral activity deserves equally varied representations.

While our prototype currently consists of simple lists and maps, the finished tool will integrate these lists and maps together in order to visualize more complex systems of circulation. It will also employ heat-mapping and gradation in order to show the shifting emphases on particular topics over time, noting whether certain topics and their circulations are regionally biased, and whether researchers’ own institutional types might have influenced the figures or topics they seek. The wire frames below depict very early renderings of possible relationships among experimental data sets. 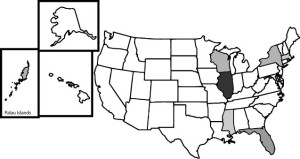 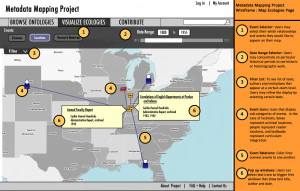 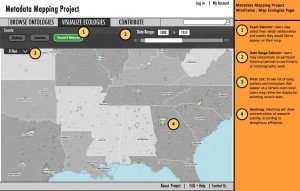 MDMP may also use gradation to privilege an archipelago rather than an undistorted landscape, much like the API employed by Mark Newman’s and Robert Vanderbai’s United States general election maps from 2004, 2008, and 2012 (see here and here respectively). The gradations in Newman’s and Vanderbai’s maps depict a somewhat “truer” hybridization of interests that tend to get portrayed as polarized red or blue associations. Ultimately, nonlinear or distorted cartograms like Newman’s may better support MDMP’s aims to achieve a visualization that shows rhizomatic relationships among researchers, their queries, other queries, and their disciplines.

MDMP is also interested in network modeling–the same principle underlying the visualization of web-based ontologies, such as the Indiana Philosophy Ontology Project–where various categories of information appear in the same ontological space with information that is  typically catalogued separately. Plans for its renderings have been inspired by two additional projects: Johan Bollen’s development of usage-based impact metrics (JCDL, 2008), which offer a way of modeling the citational closeness or distance between shared topics across different disciplines; and the University of Richmond’s “Visualizing Emancipation” project, which overlays various documentary evidence to map activities related to the abolishment of the slave trade in North America pan-historically, i.e., as whole events that occur across different periods of time, not as single isolated events or outcomes.

Like these projects, MDMP’s visualizations will reflect a uniquely rhetorical approach since they operate on principles of critical consumption, occurring through fluctuating relationships between material agents and immaterial activities that don’t only exist in bibliographic form. For example, three iterations of an unpublished curriculum might migrate to three different schools in three different states, but the migration is only traceable in an administrative memo or a vita line. MDMP aims to visualize the event of that migration.

For example, the screenshot below reflects a graphed relationship of names and life spans of some of the NCTE‘s presidents between 1912 and 1967 as extracted from the Appendix of J.N. Hook’s historical pamphlet, “A Long Way Together.“ What determines their relationship to one another in this graph is not only the role that they played (e.g., “First Vice-President,” “Second Vice-President,” etc.) but also their representation in the Virtual International Authority File. MDMP seeks to complicate these relationships through its visualized ontologies by drawing on metadata and even paradata that illuminate the absence of women pedagogues’ representations in historical documents produced by organizations such as the NCTE and in authority records such as the VIAF.

Yet another possible network model for MDMP is a taxonomical overlay of terms reflecting the researcher’s network overlaying that of the subject. Or, a spatial arrangement–not of individual terms in an ontology but of the shifting relationships between their topics and the factors that cause them to shift, i.e., whether the user is researching for a conference paper, building a finding aid, preparing a course in feminist rhetorical practices, or fulfilling personal interests. MDMP’s visualizations aim to creatively render the relationships between topics and locations, showing certain concentrations of users’ activities.