In “Works and Days,” Hesiod spoke of a society—a “first generation” of mortal men sprung from gods—so secure that when its people died, “it was as though they were overcome with sleep, and they had all good things; for the fruitful earth unforced bare them fruit abundantly and without stint. They dwelt in ease and peace upon their lands with many good things, rich in flocks and loved by the blessed gods” (lines 109-120; transl. Evelyn-White 1914).

Eventually, this generation passed and second, third, and fourth generations were regressively borne, although the fourth contained one group that recalled some of the “honour and glory” of the first, living in exile, ruled by Cronos, and more or less “happy heroes for whom the grain-giving earth bears honey-sweet fruit flourishing thrice a year” (lines 159-169b). And then there was the fifth: Hesiod’s “current” generation—a “race of iron” susceptible to the virtues and vices, promises and deceptions, mingled goods and evils of a toiling generation—a generation that would strive (lines 170-201).

I oversimplify Hesiod’s etiology, but I used to take strange comfort in what I thought was the fifth generation’s moral attitude about the non-human animal. Today, I see more clearly what Phelps (2007) and Sias (2015) see in this ancient text—or, rather, what they don’t see, and what Haraway (2007) has likely seen all along. Today, I see more clearly that such an attitude isn’t there. As I grieve the loss of my non-human* writing partner and companion [cum panis] of 15 years, there is nothing to help resolve the profound loss that this is, let alone to explain it, or the choices that led to it.

Among the many stances we articulate as human beings—to share, to live, to serve, to harvest, to protect, to diplomate, to plan, to learn, to teach, to love, to create—how best do we articulate a stance for co-domesticating the animal? For our role as domesticating agents that are in service to each other? And on what extra-moral grounds? How do we know we have cared for them well, and whether our unique symbiogenesis gives us the right to determine their fate?

It’s tempting to read Hesiod’s passages any number of ways—they offer the possibility that humans can find abundance in their world without harming, killing, or deceiving. A world this abundant in the first and fourth generations is a fruitful and “unforced” world that always produces, so its inhabitants don’t have to take from it as exorbitantly or thoughtlessly as they do in the middle or fifth generations. Yet even Hesiod’s best world was characterized by a curious lack of agency—both the human’s and the animal’s—and perhaps a thoughtlessness about the precise nature of their relationship, leaving the dilemma unresolved.

To one husky-shepherd-collie no longer with me: I will try to resolve this dilemma, someday, in terms that interacting bodies might understand, when the pain is less raw. Not today. 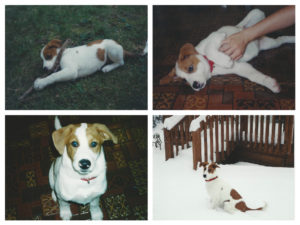 (* Thanks to KJR and AFS for affirming that this bond was more-than-human.)